Hi, Alan Melville here and I'd like to welcome you to my blog dedicated to my journey along the Bicentennial National Trail.

So a bit about the site. If you pop your Email in the field to the left and hit subscribe, you'll not have to come back and check to see if I've made any updates as you'll automatically receive a notification. Later on we'll add comments and to stop the spam, we'll put in a "Capchta" so we know your human.

The idea is too keep the site simple and therefore easy to navigate.

Don't pay too much attention to the cycling pics that are visible at the moment. They are just to add a bit of colour and are from a ride I did back in 2015, which incidentally, I purchased an old 1800 buck ute to finish the ride with....... another story, another day.......

This walk is not connected to any sponsorship or charity, it's just amongst the many different 'crazy' [I've been informed!] things I do.

Please don't expect continual updates, there will be some sections where I'll be out of contact for perhaps weeks at a time. Let's say all updates will flow with a regular irregularity. :) However, there is a Twitter tab, and once I get a handle on how all that high tech shit works, I'll use it for posting meaningless pictures of food like other people do.....can you even do that on Twitter or is that Instagram?????

I hope to fly into Cairns on Friday the 5/5/2017. I need to pick up a battery from Jaycar for running my electronics, and I'll then jump on a bus Saturday morning and head to Cooktown, where, no doubt, I'll need to visit the local Supermarket to pick up 'high tech specialized' trail food, [baked beans, salami, you know, that sort of shit] I'll hunt down the trail head and maybe start walking Saturday arvo if I feel up to it, otherwise I'll leave Sunday morning.

In order to carry all the shite that we deem necessary in this modern age, I'm going to use a 'Monowalker' which is a 1 wheeled hiking trailer. I'm told by its inventor, Kai, that it will halve the weight on my shoulders due to the harness system it utilises. Trust me, I shall be keeping this under close surveillance and will report all findings here. I'll be assembling the Monowalker [hereafter known as the MW] tomorrow. My first impression is one of very high quality, attention to detail and it's blatantly obvious that it's designed by a German and NOT made in China!!! Mind you, it cost me a few bucks to land it here in OZ.

The MW and obtaining the required permissions / guide books from the BNT committee are the extent of my 'Training and preparation' that have taken place for this trip. However, those that know me well will understand that I don't require any further prep than that. The preceding comes with one caveat; I have eaten like a horse this year and put on 17 Kg's for the walk. I suspect I'll lose about 20 Kg's if I complete the walk. I've already lost 3 Kg on a motorbike ride I've just completed from the Gold Coast back home to Muka........bring on the Mars Bars I say.......  :)

So, here's a few silly little stats for you, I have an sad history for working out these silly little things......

OK, it's way past my bed time. Here's hoping I can keep you entertained with 'stories from the trail' and also post a few nice pics of the country I pass through.

Here's an article about the BNT from Wikipedia;

The trail was initiated and planned by the Australian Trail Horse Riders Association. The association spent many years planning and negotiating a route that linked up the mustering, brumby tracks, pack horse trails, historic coach roads and stock routes, thus providing an opportunity to legally ride the routes of stockmen and drovers who once travelled these areas.[3] 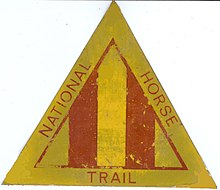 The development of this image was left to a committee led by R. M. Williams. Dan Seymour was sponsored by R.M. Williams to find a route along the Great Dividing Range, and to promote enthusiasm for the proposal. Dan volunteered to ride the Trail and set off from Ferntree Gully, Victoria in February 1972 with two saddle horses, a packhorse and ‘Bluey’ his blue heeler cattle dog. The Australian Trail Horse Riders Association provided Dan with encouragement during this lengthy journey. His amazing twenty-one month ride finished in Cooktown, Queensland in September 1973. Dan’s journey, which was regularly reported, created increased interest in the formation of the Trail.

The development of this image was left to a committee led by R. M. Williams and coordinated and planned by Brian Taylor [4] in cooperation with the Australian Trail Horse Riders Association affiliated clubs, farmers, landowners and government agencies.

In 1978 the first mail was carried along the route, initially known as the National Horse Trail, from Cooktown by a group of registered riders. These riders were acknowledged with a commemorative medallion.

The Trail committee proposed that the concept be made a project to celebrate Australia’s Bicentenary in 1988. The suggestion was accepted, and funding of $300,000 was available to research, mark a route and print guidebooks. In November 1988, this had been accomplished and the Bicentennial National Trail was opened. Since the opening of the trail people have travelled all or a part of the trail with camels and donkeys as well as with horses and mountain bikes.

In the rainforest with packhorses The Creb track

This Trail links eighteen of Australia's national parks and more than 50 state forest providing access to some of the wildest, most remote country in the world.[6] The Bicentennial National Trail is suitable for self-reliant horse riders, walkers and mountain bike riders. Parts of the Trail, such as some of the Jenolan Caves to Kosciuszko section, are suitable for horse-drawn vehicles.[6] The BNT trail route is not open to motorised vehicles or trail bikes, and pets or dogs are not permitted. The trail is divided into 12 sections, of 400 to 500 kilometres, each with a corresponding guide book.

2. Gunnawarra to Collinsville, through the grazing country of far north Queensland.

6. Blackbutt, Queensland to the New South Wales border at Cullendore; this start of this section of the trail follows the Brisbane Valley Rail Trail.[7]

8. Ebor to Barrington Tops, is another rugged remote section that passes through Oxley Wild Rivers National Park. After passing Ebor the trail crosses the Point Lookout Road before it passes briefly through Cunnawarra National Park. It then runs on the east of Georges River until it crosses the Armidale to Kempsey road. The track is mostly unmarked as it follows the Macleay River past the historic East Kunderang homestead in Oxley Wild Rivers National Park. Following Kunderang Brook it winds its way to mustering huts at Left Hand Hut, the remote Middle Yards Hut, Youdale’s Hut and to Cedar Creek on the edge of Werrikimbe National Park. After crossing the Oxley Highway the trail passes through the Mummel Gulf National Park. This section takes at least five days to travel and all food and equipment has to be carried. There are numerous creek and river crossings, with some steep ascents and descents. 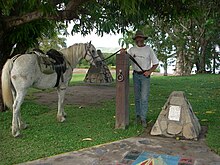 The start in Cooktown

11. Mt Kosciuszko to Omeo, including the Tom Groggin Track

12. Omeo to Healesville, near Melbourne